How to Peel Wine Corks and Flatten Them

I once saw "flattened" wine corks on a trivet. I loved it. Being my favorite, I tried to find out how to do it. As it turned out, it was the ONLY flattened wine cork project I could find on the internet. And, no such tutorial was out there. So through trial and error, I came up with my own.

I picked up a lazy Susan at a thrift shop and decided it would be my first flat wine cork project...
just for practice.

The lazy Susan is a manufactured pressed wood product, so it needed redoing anyway. For two bucks... it was a cheap trial. 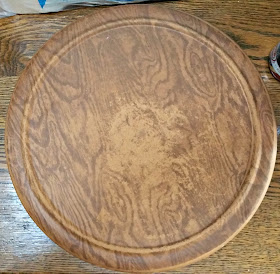 Everything you've heard out there about heating up the cork to cut it easier is VERY true! Steam them, boil them, warm them in hot water... whatever method you opt for, the key is warm water.

It makes the cork swell and it cuts very easily.
(Cold corks are tough and crumble!) FYI: I used both real cork and synthetic. It was necessary to heat both to cut them. The synthetic type cut easier after heated. 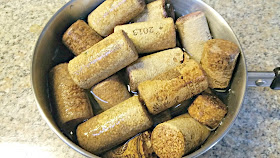 After a low boil... and to start "peeling", I simply cut into the cork in the center and part way enough to start peeling it like an apple.

With the index finger holding one end of the cork and the thumb on the other, cutting was slow, but easy to do.

It was best to use a cutting board with a paper towel for traction. You don't want the cork and knife to slip, so a towel holds it in place perfectly while absorbing some of the hot water. 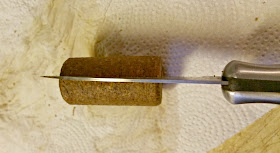 I used a serrated knife and "sawed" it back and forth while peeling a thin layer off the cork. 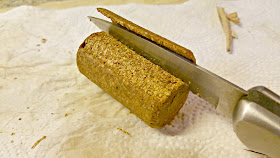 Once the peel was successful, the layer obviously curled. 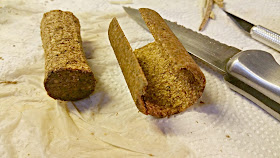 Because the cork was still wet, I added weight to the cut layers and allowed them to dry on paper towels. For the purpose of showing you how, I used this photo... 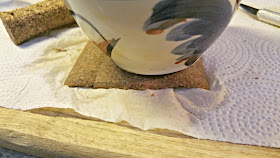 but I actually used heavy cast iron bacon press to flatten the curled cork layers. It flattened about 8 of them at a time.

You can use cast iron pans, heavy books, or whatever you have, to hold the corks flat for about a day to allow the cork to dry. 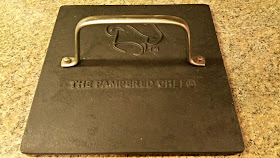 Once dried, they can be glued to any project surface. 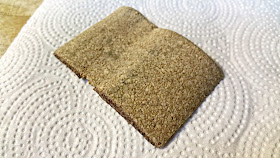 For the sake of the lazy Susan, I found the center to "tile" the cork peels onto it.
Quite similar to tiling a floor or wall. 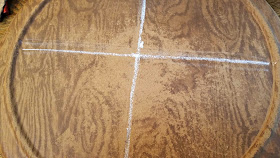 I used chalk lines drawn on as a guide to place my "tiled" cork pieces with hot glue. 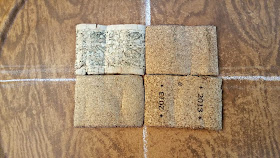 Taking my time, I pressed each piece on with my fingers, spreading the glue and cork out.
Then trimmed the edges off with an exacto knife. 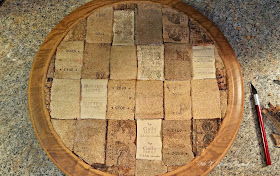 I decided to freshen up the lazy Susan with some stain around the edges. 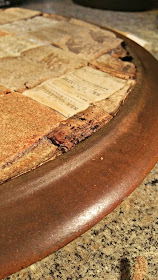 Then trimmed off the cork with a border of rope cord with glue. (For more interest and an extra lip on the lazy Susan.)

To give the cork and lazy Susan a top coat, I used two coats of polyurethane; drying in between.
It helps to have such a surface for cleaning purposes. It also brought out the cork particles for a better visual. 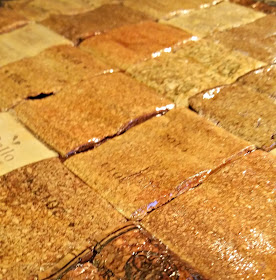 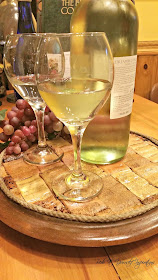 Or sparkling water indulgence. (My favorite) 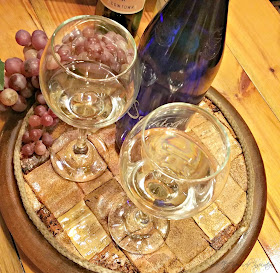 This "peeling" technique worked nicely.
I did try using the scroll saw and my band saw, but I prefer to keep my fingers. As careful as I was and know my shop tools, it was extremely scary. I don't recommend electric tools to cut the corks. If you do simple "half" cuts, it's fine, but not for "peeling".

Control and time with a serrated knife worked best out of each of my attempts. Yes, they can be sloppy, but with practice and patience, they will become second nature. Like peeling apples. 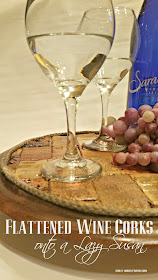 Even though I like the look of half cut wine cork trivets, trays and such... 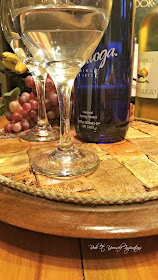 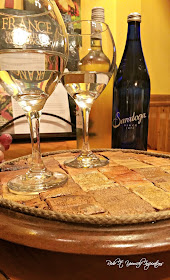 It's easier to keep clean.
And it looks neater. 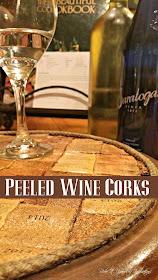 By the time I do several peeled cork projects, they should get much better looking and easier to do.

The problem... I need corks. Luckily I have three resources to snag them from again. But, I don't know if they can supply my new demand. (wink!) Well, maybe the restaurant can. 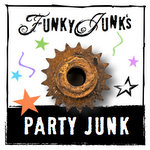 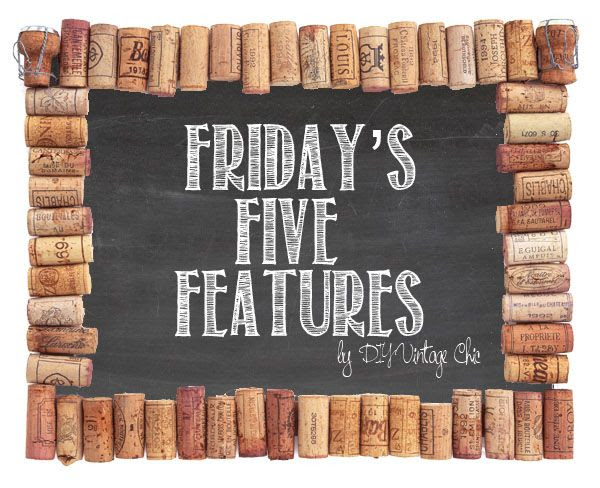