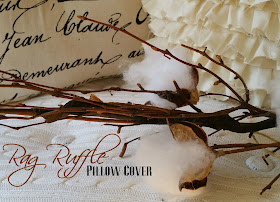 While I was doing a chair makeover, it's original pillow/backrest was too trashed to keep. Well, let me say... disgusting. Some things I just won't redo. A yucky pillow is one of them.

So I ran to my stash for these old velour sofa pillows. Even though they are 70's ugly, they are well made; heavy, clean, and well cared for. They are perfect for backrest pillows. 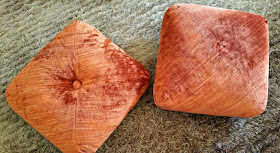 I bought some nice French typography fabric and some off white linen to make new covers for those orange "heebie jeebies". 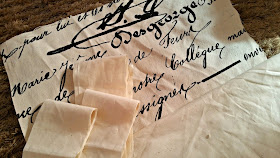 I cut the front from the plain linen and the back from the printed fabric. Then cut up several 3" linen strips at three times the width of the pillow front to "ruffle" them on the sewing machine. (Leaving the raw edges for rustic texture.) This is where the term "rag" comes in. Similar to fringing denim.
Sorry, Grandma! (She would NEVER do such a thing.) 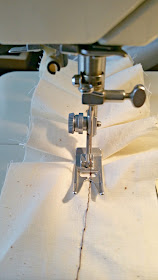 I went with a dark brown thread for contrast.
(that didn't work; as you'll see in the rest of the post) 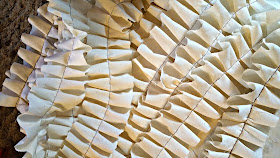 Then I pinned and sewed the ruffle strips onto the pillow front by folding them. Using the folded side as a guide to sew the next row along it and so on. 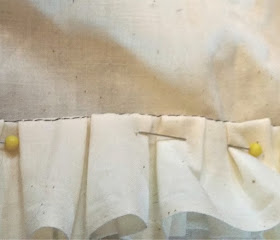 This is where my thread contrast didn't work. It become sewn in and doesn't show unless you open the the ruffles up.

That's okay. The front of the pillow still has the rustic romantic look I was going for. 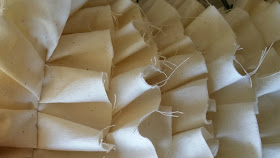 After sewing on the back, I stuffed the pillow in and closed it up. 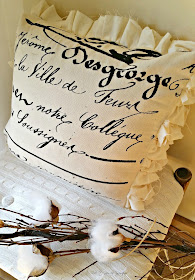 The other orange "blast from the past" pillow ended up with a basic cover in the printed fabric. I kept the tufted buttons (The button on the front attached through to the one on the back) but recovered them in the same fabric. 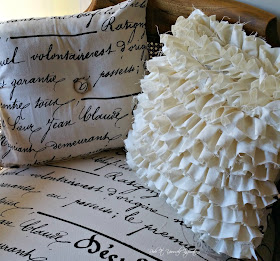 Now that the pillows have a new life on a chair redo, nobody knows that they lived through the Partridge Family... Hawaii Five-O... Dallas... and about 30 years of The Price is Right! 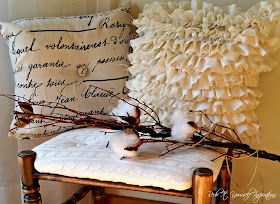 They are neutral... soft... and romantic.
Timeless, to most of us. 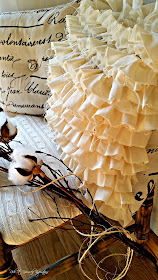 I almost bought raw edge ruffles on rolls at the fabric store. The expense was a bit pricey. So I took the time to make them instead. 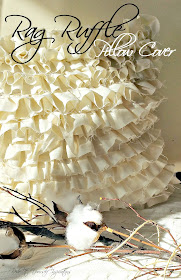 The covers are really easy. The printed pillow went fast but redoing the buttons took a little patience. The ruffles took a little time, but worth it.

Now they are on the new makeover chair. They are perfect for it. I'll post that next.

Linked to and
Featured at 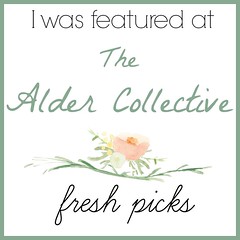 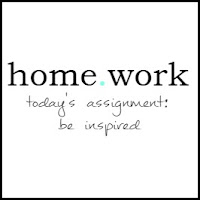